I’m very excited for the start of the NHL Playoffs tonight.  I prefer to watch as many games as possible on CBC, channel 9, in my area.

Although I grew up hating the Montreal Canadians, I always loved hearing O Canada sung in french.

Since the NHL season is drawing to a close, I thought I’d share my favorite picture from the 2016-2017 season. Connor McDavid is trying to fire up Patrick Maroon after Maroon scored a goal.  I heard an interview with McDavid and he said he didn’t think Maroon was excited enough after this goal so he thought he’d help him out. this wasn’t much of a fight.  It looks like Max learned a thing or two from his father.

I wasn’t a big fan of Max’s father Tie when he was playing. Probably because he played for the Maple Leafs for a long time and my favorite player was Bob Probert, whom Tie had a feud with. However, I learned to respect Tie and admire him. He wasn’t very big but he fought everyone and didn’t lose many.

Anyway, the apple doesn’t fall far from the tree.

says goodbye to his Mom..

Dear Mom,
I lost you just a few days ago, and I already miss you a lot.

Hockey season is over.  The Penguins won the cup and for as much as I wanted the Sharks to win, Pittsburgh was by far the better team.

Growing up near the Canadian border, I prefer to watch CBC, Channel 9’s, Hockey Night In Canada for game coverage whenever possible.  HNIC does hockey right.

Here is the 2016 season ending montage HNIC played at the end of Sunday’s broadcast, H/T The Hockey News:

Certain days are seared into our minds as if they were branded by a cattle prod. The 10th of August, 1979, is a morning I’ll never forget. On this warm, sunny, Friday morning at roughly 10:00 am the doorbell rang. My Mom was shopping and my Dad was at work. The only ones home were the five of us kids — the boys were age 17, 15, 13, me at 10, and my sister 8. I ran to the door and opened it. I looked up; my jaw dropped. Standing on our front porch was Chester, our local barber, and Mr. Hockey, Gordie Howe.

I was born and raised in Lathrup Village, a modern day, midwestern Mayberry. Chester was one of two barbers at Wendell’s Barbershop located at the east end of our sleepy, little street. My grandfather started taking us boys there for haircuts when we needed our first ones. At least one or two of us continued patronizing Wendell’s Barbershop for the next 40 years, until Chester retired. At the opposite end of our street, the west end, with a swimming pool in the shape of a number 9, lived Gordie Howe. By August 10th, 1979, Gordie had moved out. He was living somewhere near Connecticut as he was finishing his epic career with the New England / Hartford Whalers. But, even after he moved, that house with the pool at the end of the block, was still referred to as Gordie’s house by us neighbors.

Gordie played for the Red Wings until 1971. Chester cut Gordie’s hair and the two remained friends even after Mr. Hockey left for the World Hockey Association, first to Houston then to New England. As a 10 year old kid, I had dreams of playing in the NHL and to retire one shy of all of Gordie’s records. I used to go into Wendell’s Barbershop once a month and ask Chester to give me a “Gordie Howe Haircut”. He gladly complied.

One day Chester said to me , “when Gordie comes back in town I’ll bring him over to say hello.” I’m not sure if I really believed the promise, but I appreciated the gesture just the same. The promise was fulfilled on the morning of August 10th, 1979. The visit only lasted about 10 or 15 minutes and I don’t remember a lot other than the five of us standing on the front porch staring at him in awe. He shook our hands, signed my autograph book, chatted with us graciously, and then went on his way.

As I grew older and thought about that warm, Friday morning, the magnitude of Mr. Hockey’s generosity started to sink in. The Greatest Hockey Player to ever put on a pair of skates, a guy that signed probably more autographs than anybody else I can think of, took time out of his day to say “hey” to an insignificant 10 year old kid; probably one of a million 10 year olds that were going to be the next Gordie Howe.

When Mom came home and heard the news, missing Gordie Howe by about 10 minutes, she admonished us for not displaying better manners by inviting our guests in and offering them a snack. As usual, she was right, but I don’t think any of us were thinking straight that morning.

My Mom and Dad have both passed on, both great people by any standard. As my sister was cleaning out some old boxes from their house, she found a letter of apology I wrote sometime after the 10th. It was addressed to Gordie and obviously never mailed. I was apologizing for being so rude and not inviting him in. Now, I know he never got the note.

My Father left us at the end of February this year and now Gordie Howe is gone too. The year 2016 has claimed two great men and to both I say “Thank You and I’m Sorry” (I’m sure I owed at least one to my Dad too). 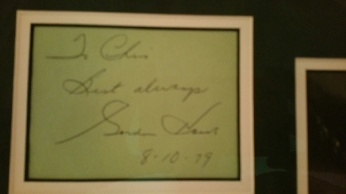 Autographed to me in his book “and…Howe”

Mr. Nurse, you have a good one.

The shot of Mr. Nurse after the fight is priceless.